One of the things I often hear people ask of the various people that train their memory is whether they ever still forget things. “Do you ever forget your keys??”, etcetera. Invariably the answer to these questions seems to be yes. So how is it that these memory geniuses can memorise thousands of digits in an hour, decks of cards in under 30 seconds and the names and faces of a hall full of people and yet still fail to remember something as simple as a set of keys or where they parked the car. The answer is because there is  a big difference between consciously applying a memory technique to a situation and unconsciously applying them automatically.  I remember thinking a lot about this about 8 or 9 months ago because I wanted to get quicker at remembering things on the fly at work and it was frustrating me that I just didn’t seem to think about applying the techniques until after the event or even after the day had finished. Remembering to memorise someones name moments after they’ve told me was another example.

I realised that during my frantic working routine I didn’t consciously think about many of the things I was doing, in fact they were completely automatic, almost habitual.  It was then it occurred to me that what I needed to start reading about and looking at was the formation of these habits and how I might alter them. I found an audio book online called ‘The power of habit’ by Charles Duhigg which I listened to on the drive home to my parents. It went through the process of habit formation and contained quite a number of very interesting stories illustrating the main points very well.  I realised this was the missing link between conscious application of the techniques and routine day to day use so I started practising.

It turns out the basal ganglia is a most useful bit of the brain in allowing you to pattern highly complex routines into a habit form.  The drivers reading this will remember when they first learned their struggle to manage gears, steering, mirrors, and maneuvering all at the same time.  Juggling your focus between them until eventually they seemed to embed themselves into your autopilot and you no longer needed to consciously process them. 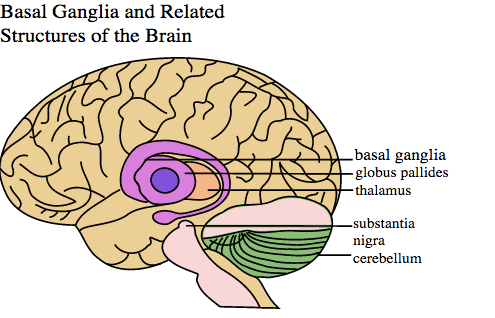 In programming terms you might imagine writing a subroutine or set of subroutines to take the place of a manual task.  It takes time to conceive how the routine might work but once written the code performs the function automatically. Then picture seeing the code evolve by itself, becoming more efficient each time its used. People generally recognise the same process of learning in many sports, but few people tend to think about how we form our mental habits.  They develop in exactly the same manner as the habits we form physically we just don’t see them happening in front of our eyes as we swing a tennis racket or change gears.  In the case of memorisation they are just as important if you want to start applying what you’re learning in an automated way in the real world!

I won’t repeat the work of others but the key thing to remember is a habit starts with a trigger & grow stronger (more likely to occur as a habit) with repetition.  The building of a habit is a conscious process at first as with learning to drive but over time it starts to embed and the subroutine gets written. So how do you create the trigger and how do you then attach it to a situation where you need to remember something.  Well I’m no expert in this area which is why I recommend you do your own reading but I’ll explain what’s worked for me so far.  In my case I wanted to put a trigger in to kick off the thought to apply a number memorisation technique to trade references I saw on the screen of a user so I could plug them into my machine when I got back to my desk.  The way I created this trigger was I’d visualise a likely scenario just before I went to bed in as much detail as possible and then play the event through in my mind where I applied the techniques.  I did this for a couple of weeks and gradually it actually started to work!

Some of the other reading I was doing at the time suggested that the brain has the ability to pattern match.  That is to say it will follow certain learned responses or habits based on a broadly matching range of different scenarios or stimuli(which I realised also meant triggers).

In an evolutionary context this was useful because it means that the automatic fear response you learned after the killer snake bit your best buddy helped you quickly react to other potentially dangerous snakes future rather than just that exact snake. So my scenario replaying before bed seemed to fit this quite nicely and I’m happy to say its worked for me quite well.  I’m still experimenting and apart from the book I mentioned there are some more expert people already working quite hard on this subject so its well worth looking into what they’re doing.  Tiny Habits are a good example and I believe Mark Channon is currently working on integrating this into memory techniques.

As always I hope someone found that of use.